This has become an old story in Israel, but one that many of the Israel and America hating, anti-Semite Left seem to love to keep pushing into the headlines. A bunch of Arabs, normally publicly identifying as Palestinians, build houses either where building is not allowed or without first getting the proper permits and the government’s response is to drive the squatters out and demolish the illegally constructed houses. 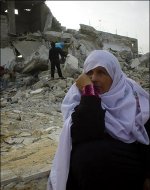 I would ask if these Liberals would raise this most current case as they have so stridently raised others in the past, but this instance of Arab’s having the homes destroyed by the government is sufficiently – and to the Liberals very significantly – different. It was the terrorists of Hamas doing it to their own people in Rafah this time.

I’m sure that the “government” of Gaza, Hamas’ demolishing such illegally built homes will sit both differently and more comfortably with the Left since they much prefer Hamas to the Jews.

RAFAH, Gaza Strip – Hamas police wielding clubs beat and pushed residents out of dozens of homes in the southern Gaza town of Rafah on Sunday before knocking the buildings down with bulldozers, residents said.Gaza’s militant Hamas rulers said the homes were built illegally on government land. Newly homeless residents were furious over Palestinians on bulldozers razing Palestinian homes.

For years, Palestinians have criticized Israel for destroying houses, mostly because they were built without permits issued by the military. Now, Rafah residents complained, their own government, run by the Islamic militant Hamas that seized power in Gaza in July 2007, has done the same.

“They promised reform and change — instead they’ve destroyed our homes,” shouted Miasar Gan, a 54-year-old woman. Gan said she and her husband had nowhere else to go. “I found my mattress, and that’s where I’ll be sitting,” she said, standing next to the concrete chunks — all that was left of her house.

Her neighbor, Nazira Abu Jara, 56, said policewomen wearing face veils typical of conservative Muslim women beat her with clubs until she fled her house with her husband and two children. “Neighbors help us get by with charity. We can’t afford to build again,” Abu Jara said.

Others picked through rubble to retrieve dusty clothing and mangled furniture.

Residents said between 30 and 40 homes were torn down, ranging from concrete structures to tin shacks. They did not know how many people were affected. Hamas officials did not allow reporters into the area until the demolition was over.

Residents said more demolitions in the area were expected Monday.

No. Don’t expect the Liberals in America to mention it at all. Certainly don’t expect the MSM to run the story since none of them have or will. That would be like expecting them to breath word of the conditions endured by the Palestinians who’ve been confined for literally generations to refugee camps in Egypt, Jordan, Lebanon, and Syria.

Even more importantly, don’t expect Obama’s regime to mention, much less condemn, this incident of home destruction.  Doing so wouldn’t further the White House’s apparent political agenda in the Mid-East which does not seem to be one that includes Israel as a sovereign nation.

This entry was posted on Monday, May 17th, 2010 at 1:17 pm and is filed under Politics. You can skip to the end and leave a response. Pinging is currently not allowed.

One Response to “Gaza Home Destruction”