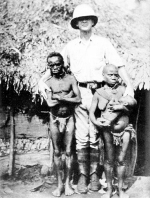 I think that, if no other lesson can be learned, the protracted race-riots in Ferguson, MO, must teach us that it is time – past time – for America to begin ending it’s colonialism. Truly, it time end White Rule in the various townships of the Blacks within America’s borders.

We need to pull out all the White politicians, civil servants, police officers, and firemen from Ferguson and other Black townships and areas and, at last, give the Blacks therein Self Rule. They’ve been chafing under the unwanted stewardship of Whites for far too long as it is.

Yes, it’s time to set down the White Man’s Burden and reject taking it up again due to it being nothing less than the most pernicious form of racism. The Blacks in places like Ferguson have, after all, complained often and stridently about how Whites are, and have been the Dominant Minority in such places, filling most of the roles in the sociopolitical infrastructure.  It’s time to end that and give them what they’ve asked for.

This entry was posted on Saturday, August 23rd, 2014 at 9:49 am and is filed under Politics, Society. You can leave a response, or trackback from your own site.