Death To All Juice

Sometimes one’s enemies do things that are far more laughable than they are dangerous. The Islamists are often among the more humorous enemies of civilization – though one shouldn’t discount their desire and capacity to enact savage acts of violence and terrorism. Still, we should enjoy the humor as we can. 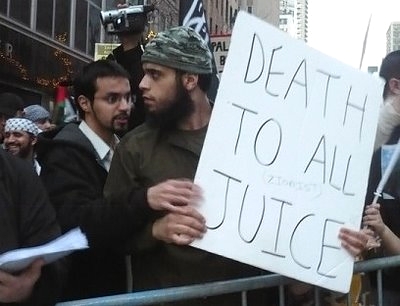 Death To All Juice

Quick! Lock up the OJ! Guard the grapefruit! Protect the nation’s apple supply!  The Islamist Kefir Caliphate may soon be attacking a grocery store near you. 😆

This poor, illiterate antisemite, who was protesting Israel in Manhattan on December 28th, 2008, really made a fool out of himself and what passes for his cause. Notice the look on the better dressed and presumably better educated Muslim behind him – the one trying to yank that sign away. Ouch!

The poor, benighted fool also seems to have never learned that oranges were one of Gaza’s major exports and cash crops before the interdiction.  Death To All Juice might not be the best or most appropriate slogan to brandish at a pro-Palestinian street protest.

Sometimes I wonder how these fools manage to use their weapons. Oh yeah, sometimes they don’t.

On a much more serious note – I wonder if improving the dismal literacy rates and overall education levels in many of the more problematical Islamic nations would reduce their peoples’ likelihood of joining the jihad or just make them more dangerous.

This entry was posted on Monday, February 16th, 2009 at 9:52 am and is filed under Politics, Society. You can skip to the end and leave a response. Pinging is currently not allowed.

5 Responses to “Death To All Juice”