I’m unsure, not if, but how quickly President Obama’s worldwide appeal will fade, eroded away by a combination of the truth of his agenda and the realities of leading a superpower in chaos-ridden world. One thing Obama has though is the continuing, globe spanning appeal of his 2008 campaign propaganda and slogans.

A plethora of individuals, groups, and corporations have jumped upon Obama’s campaign motto and his artwork for their latest advertising campaigns. It’s really quite the “new thing.” There are, and will continue to be some problems though. 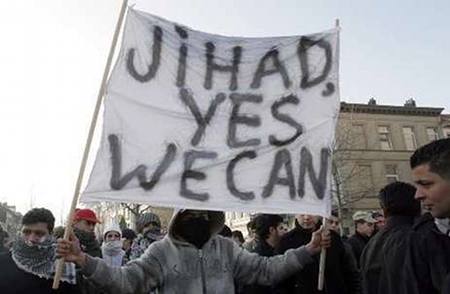 Jihad, Yes We Can

dolls briefly produced by Ty, inc. of Beanie Baby fame; the small but vicious army of attorneys hired by the White House can deal with the commercial uses of President Obama’s brand. President Obama has – or should have – much bigger concerns regarding brand management than a handful of corporations using his slogans.

Obama, a brand too far? When marketing any product, brand reach is critical… But so is brand management.

I’m guessing that having his slogans used by various insurrectionists, terrorists, insurgents, rioters, and other groups with anti-social intent might not do well for President Obama’s image during his already begun campaign for reelection in 2012. 😉

This entry was posted on Monday, February 16th, 2009 at 8:30 am and is filed under Humor, Politics, Society. You can skip to the end and leave a response. Pinging is currently not allowed.