In America we’re getting deeper and deeper into the 2012 election season, though one could argue that, with Obama installed as POTUS, we’ve been in it since January, 2009. Be that as it may, it’s now painfully obvious that we’re fully engaged in the next election.

Nothing lets us know that the 2012 election season is now in full swing more than Obama arranging a “nice” photo-op of him taking his family to church this last Sunday (July 17, 2011). 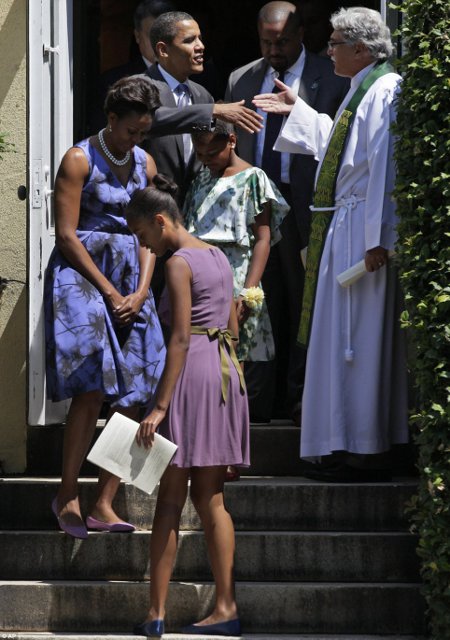 Yes, it was a pathetic attempt at courting Christians from a being whose personal theology is a matter of grave doubt, but it the sort of thing Americans have to come to expect from Obama.

Americans have to keep it firmly in their minds that Obama believes that the separation of Church and State is a one-way matter. In what passes for Obama’s and his followers’ mind the Church, other than the Cult of Obama, cannot be allowed to inform the law but the State can make use of the Church where, when, and how it sees fit.

Keep your eyes open. Travel light but load heavy, and always put another round in the enemy after they’re down. Remember that we are each the Gods’ hands 😉

This entry was posted on Monday, July 18th, 2011 at 5:59 am and is filed under 2012 Election. You can skip to the end and leave a response. Pinging is currently not allowed.