We’ve all seen the recent crop of up-scale Liberals with their demands for “Fair Trade,” “Organic,” and “Reduced Cruelty” products. Mostly they’re coastal elites with plenty of wealth and enough time on their hands to crowd up the Starbucks and Whole Foods of the country.

While their smug moral superiority mixed with strident calls for all of us to be forced into their choices can be more than a little annoying, I can’t really fault the ethical stance of their personal shopping choices. In fact, I’ve made many of the same ones myself. 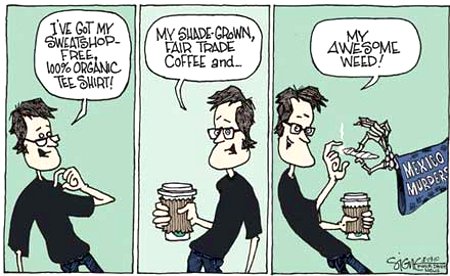 The Liberals’ Fair Trade Failure – Their Ethics Go Up In Smoke

It’s rather ironic though that all these Liberal “hipsters'” ethical consumerism goes up in smoke as it were when it comes to toking up. 😉

But hey, I suppose that they have to draw the line somewhere…

With a grateful H/T  to In2theFray for the image.

This entry was posted on Friday, April 9th, 2010 at 12:13 pm and is filed under Ethics & Morality, Humor, Society. You can skip to the end and leave a response. Pinging is currently not allowed.