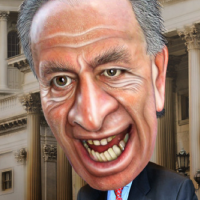 Yeah, the comma in this post’s title is actually important. This isn’t about the courts imposing racial quotas; it’s about Chuck Schumer trying to impose race quotas on the Court. Chuck Schumer had the audacity and unmitigated gall to stand on the floor of the Senate and reject one of President Trump’s judicial nominees, Marvin Quattlebaum because and, if one is to lend Schumer the hand-out of credence, only because he’s White.

This entry was posted on Sunday, March 11th, 2018 at 1:04 pm and is filed under Politics. You can leave a response, or trackback from your own site.