Liberals and Progressives love to regale Americans with tales of how the nation is becoming more and Leftist and how people want more government in their lives. Sadly for them but happily for Americans, this seems to be erroneous. The vast majority of people in America are capable of recognizing the threat that Big Government poses to the lives, livelihoods, and liberty of the People. 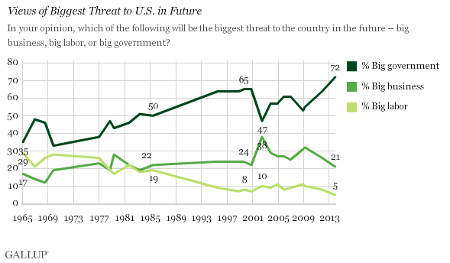 72% of people in America say Big Government is a greater threat to the US in the future than is Big Business or Big Labor. This is a record high in the nearly 50-year history of this question. When Gallup first began asking the question in 1965 only 35% of Americans said “big government” would be the biggest threat to the country in the future.

Now, even a slim majority of Democrats can recognize the existential threat that the US government poses to the People. This is a significant data point since this is the first time approximately 45 years that a majority of Dems have responded in this way to the poll. 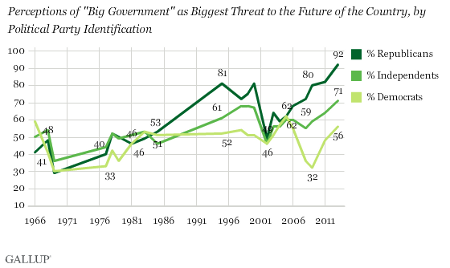 Even 56% of Democrats See This Fact

One point of interest and difference between Americans and Liberals in this matter are that the election of Obama had little impact upon trend in responses from Americans but coincided with a sharp decline in fear of Big Government among Liberals. That decline, however, was very short-lived; it didn’t survive Obama actually being POTUS.

This entry was posted on Tuesday, January 21st, 2014 at 12:02 pm and is filed under Politics. You can leave a response, or trackback from your own site.