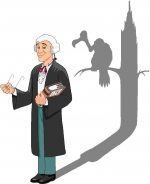 It should really come as no surprise to any American that lawyers are the subject of a rich and pithy genre of humor. Truly, anyone in a profession that is considered less honest and ethical than car salesmen must be expected to be the butt of a plethora of jokes.

Frankly, as a common profession, I can think of few groups more deserving of being criticized and lampooned. They, more so than anyone else – including the interrogators at GitMo – make a living off of other people’s misery.

Here’s a small and relatively kind sampling of the genre:

Question: What’s the difference between a lawyer and a vulture?
Answer: The lawyer gets frequent flyer miles.

Question: What’s the difference between a lawyer and a catfish?
Answer: One is a slimy, bottom dwelling, scum sucker. The other is a fish.

Question: What’s the difference between a lawyer and an onion?
Answer: You cry when you cut up an onion.

Question: What do you have when a lawyer is buried up to his neck in sand?
Answer: Not enough sand.

Question: What do you call 25 skydiving lawyers?
Answer: Skeet.

Question: What do you throw to a drowning lawyer?
Answer: His partners.

Question: What’s the difference between a shame and a pity?
Answer: If a busload of lawyers goes over a cliff, and there are no survivors, that’s known as a pity. If there were any empty seats, that’s a shame.

Sadly the joke, cruel and cutting as it is, is upon we, the People for we are the ones who played it upon ourselves by electing members of a profession who are near iconic for their torpor of conscience and moral flexibility to positions of authority.

This entry was posted on Tuesday, October 12th, 2010 at 4:13 pm and is filed under Humor, Politics, Society. You can skip to the end and leave a response. Pinging is currently not allowed.