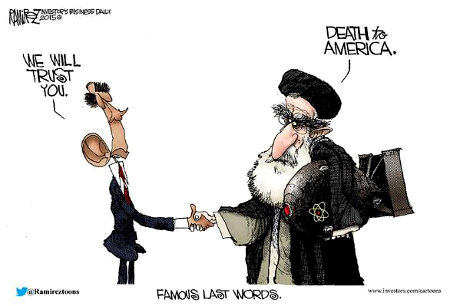 The problem with the general public’s views of Obama’s nuclear weapons deal with Iran is it is predicated upon unproven postulates and doesn’t take into account Obama’s own personal views.

Firstly, any issue with the wisdom of Obama’s agreement with Iran over that nation’s ongoing attempt to develop nuclear weapons should never be predicated upon the hypothesis that the boy was trying to prevent such. That would be making an assumption of facts not in evidence.

Secondly, Obama has no issue extending trust to a people who call America “The Great Satan” because he, himself likely has no problems dealing with the Devil to get his way and, therefor, sees a likelihood that others will do the same.

This entry was posted on Wednesday, July 15th, 2015 at 8:52 am and is filed under Humor, Politics. You can leave a response, or trackback from your own site.