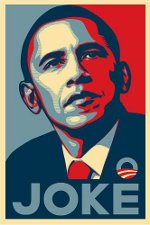 Once again Obama has had an appointment with failure. Once again the boy willfully violated the constitution in his quest for the trappings of authority, and once again the SCOTUS shot him down like a rabid dog.

The SCOTUS, in ruling upon Noel Canning v. NLRB, unanimously held that Obama’s appointment appointments to the National Labor Relations Board were invalid and an unconstitutional usurpation of Congressional authority.

That’s right! All nine Supreme Court Judges, even the Liberal ones, ruled against his illegal actions.

I believe that this qualifies as “high Crimes and Misdemeanors” under Article II, Section 4 of the Constitution. A 9-0 SCOTUS ruling definitely makes Obama’s guilt a legal fact as opposed to a matter for prosecution and question. Can we now moved to the boy’s impeachment, please?

This entry was posted on Thursday, June 26th, 2014 at 12:34 pm and is filed under Politics. You can leave a response, or trackback from your own site.