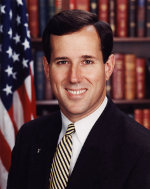 Rick Santorum has once again infuriated America domestic enemies by speaking unpleasant truths. This time the former House Representative (PA 18) and Senator (PA) unequivocally declared that Jihadism was evil and that Shari’a was incompatible with both America’s laws and our Constitution.

Naturally these truths have infuriated the Left, who are quick to equate truth with racism and/or fascism when it is unapologetically spoken by an American, especially a White, Christian American.

DURHAM, N.H. — Rick Santorum on Friday asserted that Sharia law has no place in America.

“Jihadism is evil and we need to say what it is,” he said at the Strafford County Lincoln-Reagan dinner, remarks that show how the former Pennsylvania senator continues to establish himself as the candidate most-aligned with the Republican Party’s conservative base.

“We need to define it and say what it is. And it is evil. Sharia law is incompatible with American jurisprudence and our Constitution.”

Santorum, invoking New York Rep. Peter King’s hearing this week on the alleged radicalization of American Muslims, said that the “vast majority” of Muslims don’t want to it either.

“They left because of Sharia law,” he said, referring to why he believes Muslim immigrants left their home countries to come to the United States.

Santorum added, “Sharia law is not just a religious code. It is also a governmental code. It happens to be both religious in nature an origin, but it is a civil code. And it is incompatible with the civil code of the United States.”

Jihadism is evil; that is an incontrovertible truth within the context of the modern age. Whether it is the violence and terrorism of Jihad as-Sayf or the words of Jihad bi-al-Lisan and Jihad bi-al-Qalam which inspire it and/or seek to use the laws and courts to further Muslim goals when those goals are contrary to Americans’ goals.

Shari’a is more than just religious tenets and obligations. It is both civil and criminal law, as well as regulating individual conduct of both personal and moral natures, and the specifics of those laws are not just incompatible with civil code of the United States; they are often antithetical to it and the core values of America.

That so many Liberals decried Santorum’s speaking of clear truths shows America – once again – what side the Liberals are on.

Where Santorum Is Wrong

On one point Mr. Santorum is wrong. That point is the common mistake born of hubris of believing that Muslims immigrated to America to be free of Shari’a. Most Muslims came to the United States, just like all the other immigrants, seeking our wealth and economic opportunities and they brought their desire to live under Shari’a with them.

On another point Mr. Santorum is, while not wrong, too limited in his thinking. Shari’a is not just incompatible with America’s civil code. It is incompatible with Democracy, as even the European Court of Human Rights realized a few years ago.

The Court concurs in the Chamber’s view that sharia is incompatible with the fundamental principles of democracy, as set forth in the Convention:

Like the Constitutional Court, the Court considers that sharia, which faithfully reflects the dogmas and divine rules laid down by religion, is stable and invariable. Principles such as pluralism in the political sphere or the constant evolution of public freedoms have no place in it. The Court notes that, when read together, the offending statements, which contain explicit references to the introduction of sharia, are difficult to reconcile with the fundamental principles of democracy, as conceived in the Convention taken as a whole. It is difficult to declare one’s respect for democracy and human rights while at the same time supporting a regime based on sharia, which clearly diverges from Convention values, particularly with regard to its criminal law and criminal procedure, its rules on the legal status of women and the way it intervenes in all spheres of private and public life in accordance with religious precepts. … In the Court’s view, a political party whose actions seem to be aimed at introducing sharia in a State party to the Convention can hardly be regarded as an association complying with the democratic ideal that underlies the whole of the Convention.

Shari’a is incompatible with democracy and human rights! To allow it to be enacted or practiced in America would be a gross injustice and an act of indefensible and unassuageable evil – even if it was only practiced by- and enforced upon Muslims within our borders.

This entry was posted on Tuesday, March 15th, 2011 at 10:27 am and is filed under Politics, Religion. You can skip to the end and leave a response. Pinging is currently not allowed.