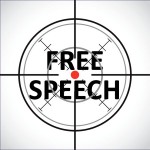 Freedom of Speech is one of the basic rights of Man – possibly the most important of such rights – but it is also the one such right that the fewest people actually believe in and wholeheartedly support. Statistically speaking, nobody truly wants freedom of speech.

They just want freedom for their speech and for the speech of others to be silenced.

Even the majority of that small number of individuals that seem to support of freedom of speech for those that they disagree with don’t really want their enemies to be able to speak freely. They just fear the possible later consequences to themselves of limiting freedom of speech for others.

No – Free Speech is Unwanted and Attacked

Thus we have: Hate Crime laws; the ongoing attempts to pass Hate Speech laws; lawsuits launched against venues hosting hated speakers; the MSM’s smear campaigns against certain sorts of individuals and groups; attempts to shutdown websites and blogs which are hated by some; and the attempts to exile certain individuals to “spam gulag” on social media sites.

The biggest lie that we tell others – and ourselves, more likely than not – is based on phrases such as, “Criticism isn’t censorship” and “You’re not free from criticism.” Like all effective lies, these are based upon a grain of truth. Our right to speak freely doesn’t mean that we can’t be criticized for our speech and criticism isn’t, prima facie, censorship.

But it is the intent that makes the lie. Vastly more often than not, what people call criticism is just an attempt to silence someone through harassment and brow-beating. Hence, it is an attempt to censor unwanted speech. It’s just one that we can easily lie to others and ourselves about.

This entry was posted on Monday, August 6th, 2012 at 8:26 am and is filed under Musings, Politics, Society. You can skip to the end and leave a response. Pinging is currently not allowed.