There Is Humor In It

During the course of an ongoing discussion about Rev. Terry Jones’ and his Dove World Church’s plans to burn 200 Qur’ans on September 11, 2010 an online friend and regular reader / commenter, ichabod made an observation about the issue:

When you think about it, this is pretty humorous.

I can see it now, Christian lighter manufacturers fighting over who gets to sign up the pastor to endorse their products. 🙂

He’s apparently not the only one whose mind went in that direction. Other could find a certain amount of humor in Dove World Church’s proposed Qur’an burning ceremony. 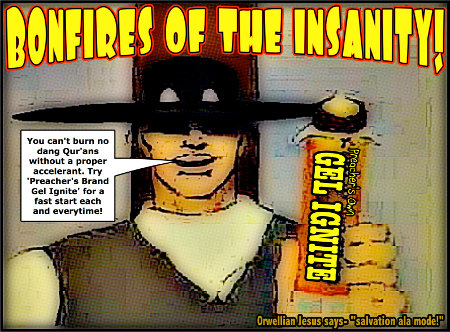 Personally I think it would be hilarious to see an spoof infomercial based upon this product. Just picture the ShamWow Guy shilling for Preacher Brand Gel Ignite while dressed up like one of those old time Parsons. 😆

This entry was posted on Thursday, September 9th, 2010 at 11:15 am and is filed under Humor, Politics, Religion. You can skip to the end and leave a response. Pinging is currently not allowed.

2 Responses to “There Is Humor In It”