The Atheist And The Bear

There’s an old adage that states that there are no Atheists in foxholes. While it is likely not completely true – some very small number of the Godless can look beyond themselves enough to serve their countries – it is true that, in extremity, even Atheists will cry out for Divine intervention.

Of course, given the odd humor of the God(s), this could lead to some quite amusing effects…

An atheist was walking through the woods one day.

“What majestic trees! What powerful rivers! What beautiful animals!” He said to himself.

As he was walking alongside the river, he heard a rustling in the bushes behind him.

He turned to look and saw a 10-foot grizzly bear charging towards him.

He ran as fast as he could up the path. He looked over his shoulder and saw that the bear was closing in on him.

He kept running, striving for yet more speed. He looked over his shoulder again, and the bear was even closer.

He tripped and fell to the ground.

He rolled over to pick himself up but saw that the bear was right on top of him, reaching for him with his left paw and raising his right paw to strike him.

At that instant of primordial panic, the Atheist cried out, “Oh my God!”

The forest was suddenly still and silent.

As a bright light shone upon the man, a voice came out of the sky, “You deny my existence for all these years, teach others I don’t exist and even credit creation to cosmic accident. Do you expect Me to help you out of this predicament?”

“Am I now to count you as a believer?”

The atheist looked directly into the light, and said, “It would be hypocritical of me to suddenly ask you to treat me as a Christian now, but perhaps you could make the BEAR a Christian?”

The light went out. The sounds of the forest resumed. And the bear dropped his right paw, brought both paws together, bowed his head and spoke, “‘Lord bless this food, which I am about to receive from Thy bounty through Christ our Lord, Amen.”

And so, the God(s) found a worthy use for one of the Godless. This is proof of Divine Providence, for no human agency in the course of our history has ever succeeded in doing this. 😉 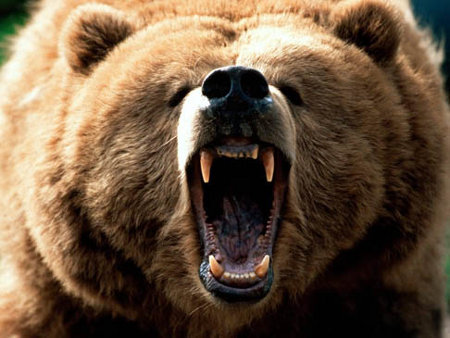 Of course, all humor aside, the sad and sinful irony of the situation is that through our failure grizzly bears have become an endangered species whereas the Godless haven’t. If that doesn’t violate natural law then nothing does.

This entry was posted on Saturday, June 4th, 2011 at 6:33 am and is filed under Humor, Religion. You can skip to the end and leave a response. Pinging is currently not allowed.

2 Responses to “The Atheist And The Bear”