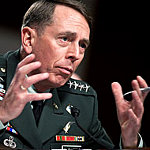 As I posted earlier, General David Patraeus recently told the Wall Street Journal that he wasn’t too pleased with Rev. Terry Jones’ and his Dove World Church’s plan to burn a pile of Qur’ans on September 11, 2010.

General Petraeus’ made it clear that he believes such an act would endanger our troops stationed in the Muslim World and civilians everywhere.

As befits a career military officer, his words were succinct, blunt, and very much to the point.

While many of us differ in our priorities and in our opinions of how much weight should be placed upon the General’s warning, nobody is refuting his claims – including the Muslims. Everyone seems to be in agreement that Rev. Jones’ plan to burn 200 Qur’ans will result in widespread violence by Muslims against Westerners in general and Americans in particular.

So, if one distills or boils down General Petraeus’ admonishment and warning, one is left with a simple, profound, and disturbing statement.

Do not offend the Muslims; they will kill you!

It is utterly beyond me how anyone, especially the Muslims, can reconcile the claim that Islam is “The Religion of Peace” and the apparently freely admitted fact, proven time and time again, that offending or insulting Islam and/or its Prophet Muhammad results in a violent, murderous response.

The Script Of Offended Muslims In Various Iterations

Muslim apologists and the various Liberals consistently claim that these acts are committed only by small fringe element of violent extremists within Islam, yet the above images involve Muslims in eight separate countries spread across four continents and include Muslims from multiple ethnic groups and overall economic strata.

When you add the above statistics to the fact that everyone in the world who was vehemently against Rev. Jones’ planned burning of a pile of Qur’ans claimed that the violent response of Muslims to this act was a credible threat to both America’s military forces and the Civilized World’s civilian population how do you maintain the claim that things are committed only by small fringe element of violent extremists within Islam?

If there are enough Muslims who would turn to violence, jihad, and terrorism due to the burning of a stack of books so as to be a actual threat to America’s forces in the Muslim World how can anyone maintain the fiction that Islam is “The Religion of Peace?” It has to be one or the other; either everyone railing against Rev. Jones is and was wrong or everyone claiming that Islamic Terrorists and Jihadis don’t make up a significant fraction of the Muslim World.

This entry was posted on Thursday, September 9th, 2010 at 3:19 pm and is filed under Politics, Religion. You can skip to the end and leave a response. Pinging is currently not allowed.