The Rat Readies To Flee

It seems that all breeds of vermin have one trait in common; they can sense impending doom and know when to scuttle off to safer nest sites. 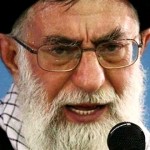 Much like a bloated, diseased rat fleeing a sinking ship, Iran’s “Supreme Leader,” Ayatollah Sayyid Ali Khamenei has made preparations to flee Iran if his lapdog, Mahmoud Ahmadinejad can’t maintain its control over the Iranian population.

The regime’s Supreme National Security Council ordered a check-up Sunday of the jet on standby to evacuate it and its brood should the situation in Iran spin even further out of its clutching grasp.

According to Radio Nederland Wereldomroep, Khamenei and its nestmates would likely attempt to flee to Russia.

Reports from Iran indicate that the Supreme National Security Council has ordered a complete check-up of the jet which is on standby to fly Ayatollah Sayyid Ali Khamenei and his family to Russia should the situation in Iran spiral out of control. The order, to the Pasdaran Revolutionary Guard Corps, was dated on Sunday, 27 December.

Such flight would follow Iranian historical precedence and be in keeping with nature of Iranian leaders. Both the Ayatolla Ruhollah Khomeini and the last Shah of Iran, Mohammed Reza Pahlevi, fled their country during times of disagreement. Such flight is part of the Persian character that stretches back to Darius III’s defeat by Alexander the Great.

If this report is true, this is good news for the salvageable parts of the Iranian population. I have my doubts though and, even if true, it could be a mere worst-case scenario precaution.

What is most important is that, if the creature and its brood do flee Iran, the Civilized World remember history – specifically the history of the vermin’s predecessor, Ayatolla Ruhollah Khomeini, and ensure that its aircraft never reaches Russia or any other safe haven.

Whether its surface-to-air missiles or a fighter intercept doesn’t matter, nor does it matter whether its American, Israeli, or European (highly doubtful chance) forces that exterminate the filth. All that matters is that it and all of its poisoned bloodline are exterminated so that the dark history of Iran won’t repeat itself.

This entry was posted on Wednesday, December 30th, 2009 at 8:00 am and is filed under Politics. You can skip to the end and leave a response. Pinging is currently not allowed.

2 Responses to “The Rat Readies To Flee”