The Inability To Learn

The inability to learn from other fools’ mistakes is one of the hallmarks of the Leftists. Liberals and Progressive can and do stand among the wreckage of failed states and rant that America should do as they had done because it’ll work this time and it’s the right thing to do. 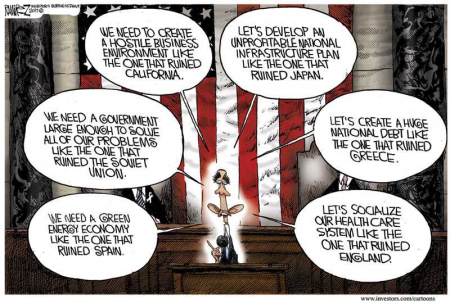 Because It’ll Be Different This Time

And so Americans get saddled with Obama, the poster man-child for this sort of “short bus” un-thinking, shuffling and jabbering away at all the “appropriate” talking points and whining for the same failed courses of action in order to keep his job.

But that’s the problem with universal suffrage; the lunatics and defectives who just can’t learn to differentiate between their delusions and objective reality keep trying to run the asylum and, when not controlled or culled, run it straight into the ground.

This entry was posted on Thursday, September 15th, 2011 at 7:04 am and is filed under Politics. You can skip to the end and leave a response. Pinging is currently not allowed.