Many people believe that Obama is a Muslim. His shills declare that he’s Christian. His choice of pastors is evidence that he’s a cultists of Black Liberation Theology. Yet some few of us think his religion is based upon personal spirituality.

One thing I find certain though; Obama is deeply committed to the core tenets of his chosen faith. ðŸ˜‰ 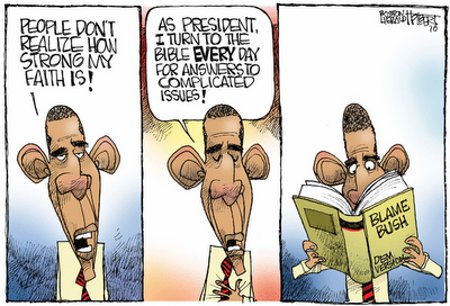 And Thou Shalt Blame Bush For Thy Failings

Well…So many people gravitate to religions that make them feel good and Obama just found one with tenets he could work with.

This entry was posted on Saturday, September 17th, 2011 at 6:21 am and is filed under Humor, Politics. You can leave a response, or trackback from your own site.