The Obama Regime has demanded that America open its doors to- and pay for 10,000 Syrian “refugees” despie warnings from its own Department of Homeland Security that US intelligence community and federal law enforcement agencies do not have the intelligence needed to vet individuals from the conflict zone. 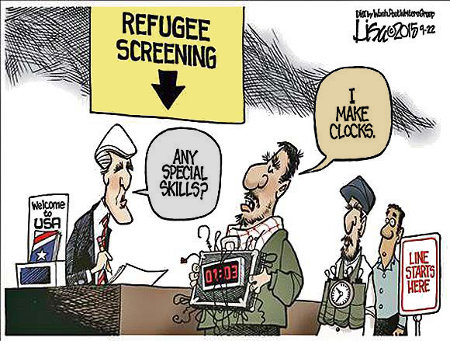 Not to be outdone by Obama’s love for Muslims, some Democrats want to expand that number of Syrian “refugees” to 100,000 – ten times the number of potentially “skilled” Syrian Muslims that Obama wants to import.

And do please remember that these unvetted or insufficiently vetted “refugees” would be be placed in refugee camps inside America. No, they will be “resettled” in apartments and houses in communities, both large and small, all across the US by 11 national Voluntary Agencies (VOLAGS) which the federal governments contracts to do so.

This entry was posted on Thursday, September 24th, 2015 at 9:43 am and is filed under Politics. You can skip to the end and leave a response. Pinging is currently not allowed.