Liberals and Progressives love to rant and whine about America’s shrinking middle class. This is actually quite logical since they’re focus has always been to garner votes from the proletariat and their methodology has always been to vilify the bourgeoisie.

There is, however, a reason why these goals and techniques consistently fail to work in America. America’s middle class, despite Leftist interference, is shrinking more due to upward mobility than downward spiraling. 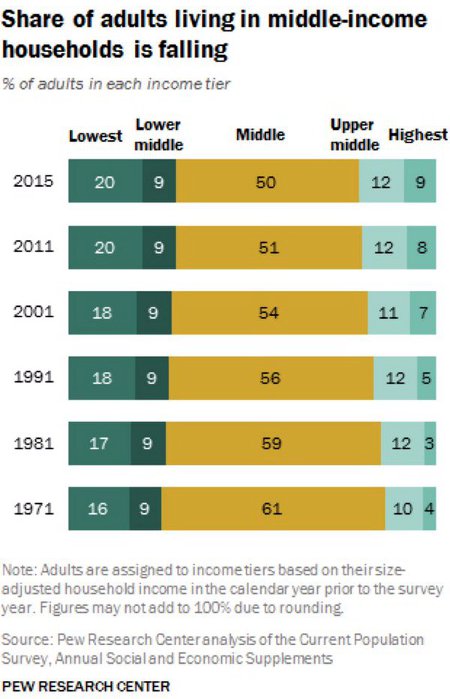 In the 44 years leading up to 2015 the percentage of adults in the middle class has shrunk from 61% to 50%, a drop of 18%. However, during the same period the percentage of adult Americans who are in the upper middle and highest echelons has risen a combined 7%, whereas the numbers in the lowest class have risen only 4%.

It seems to me that America needs to reject and cast off the Liberals’ and Progressives’ shibboleth of the “shrinking middle class” rather than allowing them to play games with people’s lives and livelihoods.

This entry was posted on Monday, June 6th, 2016 at 8:26 am and is filed under Politics, Society. You can skip to the end and leave a response. Pinging is currently not allowed.