Liberals and Progressives wrap themselves in the mantle of tolerance but they’re expression of tolerance is highly selective and doesn’t extend to Americans who disagree with them. 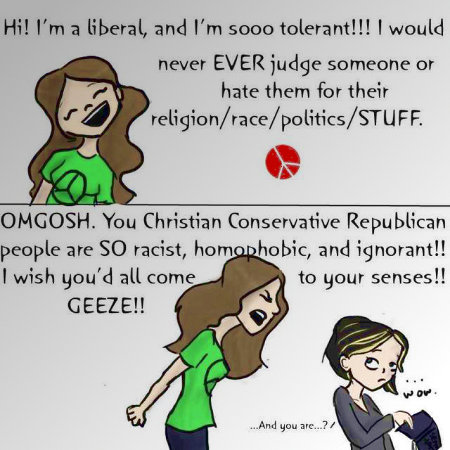 Oh they just love to cry that they’re only “intolerant of intolerance” but this is a sham, a dog-whistle for attacking anyone who holds to anything approaching normative American cultural values and who are among the normative, i.e., demographically dominant culture, White Christians with a reasonably Conservative sociopolitical outlook.

Conversely, their tolerance almost completely covers the actions and beliefs of non-Whites and non-Christians. Those groups can believe, say, and do just about anything they want without the Liberals and Progressives attacking them, e.g., the average Black and Muslim views on homosexuality and genders roles and equality.

This entry was posted on Wednesday, February 26th, 2014 at 10:47 am and is filed under Politics. You can skip to the end and leave a response. Pinging is currently not allowed.