On Thursday, September 8, 2011 President Obama stood before a joint-session of Congress and read his “Job Speech” off the teleprompter. He and it received a lackluster response.

The response, such as it was, to Obama’s speech was to be expected. The members of Congress couldn’t be expected to pay too much attention to yet another of Obama’s campaign speeches.

And worse, it wasn’t even a well-crafted campaign speech, being little more than blame shifting, class warfare, excuses, and empty rhetoric. Talking point-by-talking point, it was little except an attempt to pander to and placate each of the disparate and antithetical voting blocks of serious note in the upcoming 2012 elections.

The stupid boy never learned that you can make excuses, blame others, and attempt to lower people’s expectations and rally them to your cause at the same time. A leader of men Obama isn’t.

As for Obama’s Jobs Plan, if one can dignify it is as such, dubbed The American Jobs Act – It is much like his speech, a disjointed aggregation of direct and indirect spending meant to pander to as many voters as possible with little or no cohesion between the points. 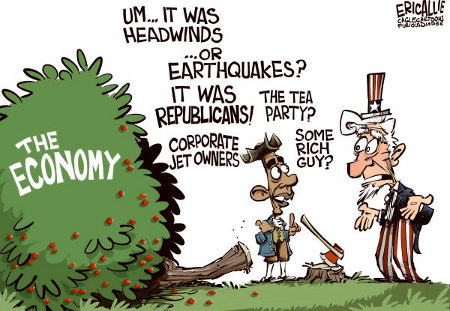 It’s Not My Fault! I Didn’t Do It! Blame The Old White Guys!

Some of the ideas stand a decent chance of providing some benefit and/or relief, but they only make up approximately $70 billion (15.6%) of the $447 billion “plan.” Another $62 billion (13.9%) is to be spent on restructuring unemployment benefits in a way they might improve people’s chances of either not losing their jobs or being able to get one again. $175 billion (39.2%) is just payroll tax breaks for workers. The other $140 Billion (31.3%) in line items are just retreads of the Stimulus, which failed to perform as touted the first time around.

The boy’s biggest problem is that the only “shovel ready” project out there is his political grave, and he’s doing a good enough job of digging it himself that he doesn’t need to hire extra help.

Between Obama’s speech and the outline for his “plan,” it’s patently obvious that Obama’s Job Plan is designed in its entirety to support the continuation of one job, his own – and, like all his previous mouthings, this one will likely fail as well.

This entry was posted on Sunday, September 11th, 2011 at 7:46 am and is filed under 2012 Election, Politics. You can skip to the end and leave a response. Pinging is currently not allowed.

One Response to “Obama’s Job Plan”