No Merit In ObamaCare

There is little or no merit in ObamaCare, President Obama’s and his Liberals government takeover of the health insurance insurance in name of Health Insurance Reconstruction. If there was any merit in it, it could be argued for under those merits and this is apparently not the case.

While President Obama may have praised the Senate on December 21,2009, for bribing enough Senators to just win a 60-40 vote for cloture on his health insurance plan in the dead of night and “standing up to the special interests who’ve prevented reform for decades and who are furiously lobbying against it now,” others on the Left have a wildly different opinion of what Sen. Reid did and why. 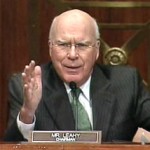 Leahy’s response was so unusual that it, at first read, beggared the minds of any and all rational men except for possibly the most discerning.

To quote President Obama, “Let me be clear,” if there was any merit in the current ObamaCare legislation there wouldn’t be any need for Senators to need “cover” for voting in favor of it. It would stand up under its own merits to scrutiny by those Senators’ constituency.

If these Senators need such “cover” – i.e., bribes in the form American tax dollars – in order to politically survive voting for ObamaCare then the legislation in question has no merit that can be argued in the eyes of the citizens they have been elected to represent.

It’s that simple. There is, as it stands now, no merit in ObamaCare.

This entry was posted on Tuesday, December 22nd, 2009 at 8:52 pm and is filed under Politics. You can skip to the end and leave a response. Pinging is currently not allowed.