There’s seemingly a great deal of ambiguity surrounding Hamas. Are they a humanitarian organization, the duly elected government of the “Palestinians” of the Gaza Strip, or a terrorist organization? Even their name, Hamas, is confusing to most people. Yet, despite the obfuscation, Hamas is easy to disambiguate… 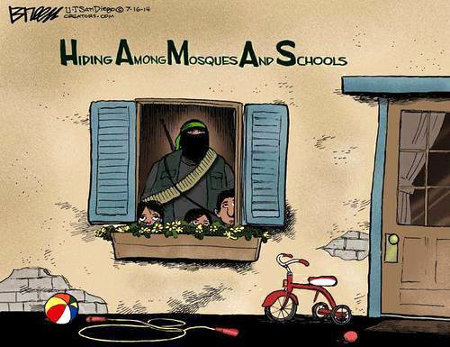 Hiding Among Mosques And Schools

And that sums up and explains Hamas’ name at least. As for the rest, it’s still a bit unclear. That they’re not people is obvious, but it’s hard to describe them as animals because it’s almost impossible to find an animal that will will hide behind its own young.

This entry was posted on Tuesday, August 5th, 2014 at 7:50 am and is filed under Politics. You can skip to the end and leave a response. Pinging is currently not allowed.