As I predicted earlier when the imagery hit the national media, the Liberals are continuing to propagate the false idea that the posters of Obama as Keith Ledger’s Joker are an example the “rabid racism of the Far Right.”

Liberals rant that this is racist

It would be odd that the Liberals keep continuing this meme if it wasn’t for the fact that deriding any and all opposition to- or dislike of President Obama and his agenda as racist is a useful tactic, both politically and ideologically. It is essentially a mirror-image opposite reuse of the old meme of “Nigger Lover” that was used by bigots against White civil rights activists in the 1950s and 1960s.

From the Left Coast:

The poster, which bears a very superficial resemblance to Shepard Fairey’s famous Obama Hope illustration, has been pasted on freeway supports and other public surfaces. It has a bit of everything to appeal to the drunk tank of California conservatism: Obama is in white face, his mouth (like Ledger’s Joker’s) has been grotesquely slit wide open and the word “Socialism” appears below his face. The only thing missing is a noose.

Sadly from one of the few Liberal bloggers that respect:

This is what it means to be a projective and paranoid neo-authoritarian American racist in the 21st century. And this is the response of the far right to the nation’s first African American president. No grace. No mercy. No decency. What a gross coarsening of the public realm. Absorb what this image means, its basic lack of civility, and the encouragement to Obama demonology that it fuels. Isn’t the cumulative logical effect of the far right’s response to Obama, assassination? And isn’t this how unbalanced people will interpret this kind of image? It’s a virtual Wanted poster, something you distribute to identify murderers. If Obama is a monster, then he must be stopped, right?

What these Liberals don’t want to ever mention or give anyone a reminder of is that this sort of cruel depiction of a US President is very much nothing new. Far worse and more insulting depictions were widely disseminated by Liberals over the last eight years. In point of fact, even depicting the President as the Joker, a homicidal, psychotic, clown-faced villain is nothing new in the cruel world of political imagery and cartoons. 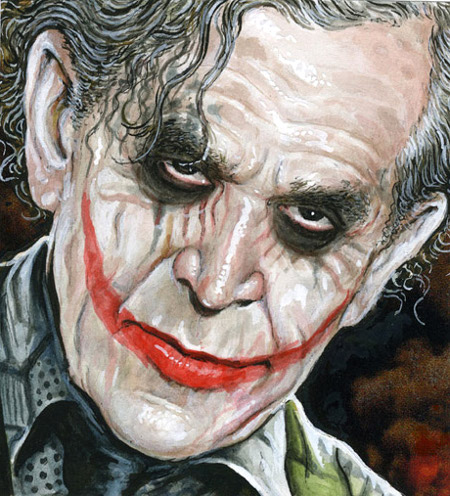 This image drew no outrage from the Liberals

Again – the Liberals’ and their minority tenants’  gambit of crying ‘Racism” over any dissent to Obama’s rule is small-minded, tired, and shows an inherent racism, ethno-guiltism, and insecurity on the part of the Liberals who favor using it. It’s a divisive tactic that underlines their fixation upon President Obama’s racial self-identification.

This entry was posted on Tuesday, August 4th, 2009 at 9:35 am and is filed under Politics. You can skip to the end and leave a response. Pinging is currently not allowed.