Mitt Romney aka Mittens aka Mr. 25% has a real problem when it comes to polling his appeal to American voters. It doesn’t seem to matter how much effort the lamestream media puts forth to secure him Republican Presidential Nomination; he just keeps hovering around 25%. 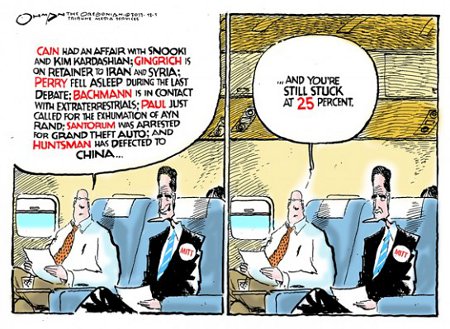 Poor Little Mittens Has A Problem

Perhaps, if Americans started an “Occupy The Primaries” movement and held up signs saying, “I’m One Of The 75%,” Mr. Romney might get the hint that the American people want a true choice in the 2012 Presidential Elections and we don’t consider him a choice.

Romney should go beg Obama’s handlers to let him replace Biden on the Dems’ 2012 ticket. Mittens and Obama are brothers by a different mother.

This entry was posted on Thursday, December 8th, 2011 at 12:40 pm and is filed under 2012 Election, Humor. You can skip to the end and leave a response. Pinging is currently not allowed.