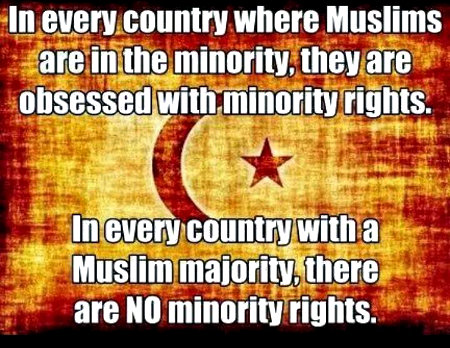 This is a simple an incontrovertible fact – Muslims only care about “Minority Rights” when they are the minority in question and can profit from such things. As these vermin grow in numbers, power, and influence within their host nations’ bodies, they become more and more intolerant and intolerable until such time as they can take control of the nation and destroy all non-Muslims.

As in all case of disease control, it’s more effective to purge the disease and its carriers while their “load” is lower. America and the West should remember that.

This entry was posted on Sunday, September 13th, 2015 at 9:37 am and is filed under Politics, Religion, Society. You can skip to the end and leave a response. Pinging is currently not allowed.