Apparently this sort of misbehavior is a “Black Thing” and we Whites just wouldn’t understand. Nor is it considered politically correct to comment upon it in other than a sympathetic manner. 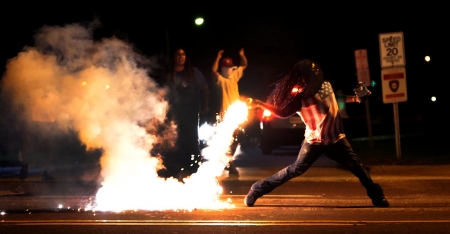 This is not to say that every Black who engages in some form of public protest is a violent animal. Many Blacks do contain themselves to less violent means of venting their anger. Yet violence, riots, looting, and threats of a race war are part and parcel of every Black protest. Nor do the less violent Blacks ever denounce, deal with, or turn in their more feral and savage brethren.

Truthfully, the “Black Community” is a lot like the Muslims. The radicals want to kill you and the moderates want the radicals to kill you. This similarity explains why it’s so easy for Blacks to be converted to Islam in prison and to be radicalized into jihad.

The truly sad and dangerous part of this is that it works fairly well for the “Black Community.” Somehow, some way America has been brow beat into accepting and bowing to this sort of insurrection and terrorism whenever and wherever the Blacks choose to engage in it.

This entry was posted on Wednesday, October 15th, 2014 at 10:10 am and is filed under Politics, Society. You can leave a response, or trackback from your own site.

One Response to “Oh Look! A Black Protester”