Obama’s always been fond of American history and the boy’s shown himself to be even more fond of injecting himself into it. He’s also a product of Critical Race Theory which relies upon storytelling to indoctrinate its students, hence his reliance upon narrative over facts. 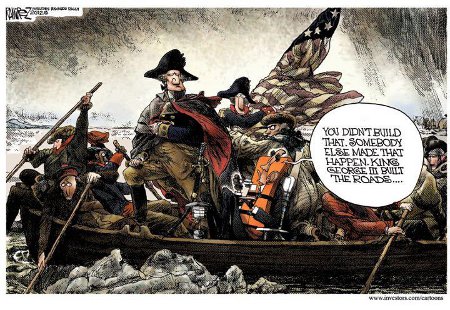 George, You Didn’t That, Somebody Else Made That Happen!

It’s quite interesting how these facts merge together and what effects they would have if taken to their logical extremes.

Yeah, I could picture Obama counseling George Washington and the other Founding Fathers that all good comes from the government. That is, of course, if he didn’t fight for the British as very many of the Blacks did during the Revolutionary War. 😆

This entry was posted on Wednesday, July 25th, 2012 at 12:41 pm and is filed under Humor, Politics. You can leave a response, or trackback from your own site.