I know that it’s hard to believe but it seems that we’re witnessing a battle royale. It’s the Imperial President, Obama I vs. the Queen of Talk, Oprah Winfrey and the battleground is ObamaCare. 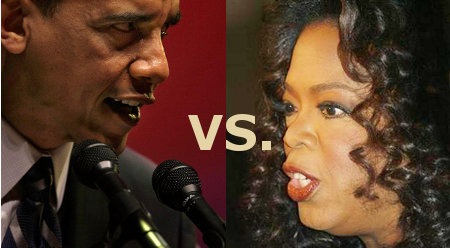 Obama vs. Oprah – A Battle Royale

It did seem strange that Oprah wasn’t shilling for the First Black President’s signature health care law. She was, after all, instrumental in getting him the Democrat nomination in the 2008 primaries and in later getting him into the White House.

At least the New York Post provides an explanation for this.

As the White House was gearing up to sell ObamaCare to the American people last summer, Valerie Jarrett, the presidentâ€™s pointwoman on a host of issues, phoned Oprah Winfrey.

She invited the Queen of All Media to join celebrities, including Amy Poehler, Jennifer Hudson and Alicia Keys, to meet with President Obama and discuss how they could generate publicity for his health-care law.

â€œAll of Oprahâ€™s top people thought she would go, because when the president invites you to the White House, most people automatically say yes,â€ said one of Oprahâ€™s closest advisers. â€œBut Oprah said she didnâ€™t have the time or inclination to go. It wasnâ€™t like she had to think it over. It was an immediate, flat-out, unequivocal no.â€

Instead, Oprah sent a low-level rep from one of her talent agencies, which was regarded as a insult. Obama had been counting on Oprahâ€™s immense persuasive powers to help enroll millions in ObamaCare. But as the rollout turned into a disaster, Oprah didnâ€™t lift a finger to help.

This is not to say that Oprah has come out against ObamaCare. Obama’s pseudo-quasi-semi-nationalization of America’s health insurance industry is the current battleground, not what is being fought over.

The reasons why the Queen of Talk refused to shill for the Obama Regime seem to be far more venal than that, which is frankly the only reason why I’m willing to cite the New York Post – They’re so very good at the venal and/or prurient.

Everyone remembers that Oprah went all out for Obama during the 2008 presidential election. What was not reported was that, in return, Oprah was promised unique access to the White House if Obama won. Sheâ€™d get regular briefings on initiatives and a heads-up on programs to give her material for her fledgling cable network, OWN.

â€œOprah intended to make her unique White House access a part of her new network,â€ a source close to Oprah told me. â€œThere were big plans, and a team was put together to come up with proposals that would have been mutually beneficial.

â€œBut none of that ever happened. Oprah sent notes and a rep to talk to Valerie Jarrett, but nothing came of it. It slowly dawned on Oprah that the Obamas had absolutely no intention of keeping their word and bringing her into their confidence.â€

That’s the Obamas for you. They have never learned the lesson that loyalty is a two-way street. It’s likely that, given their entitlement mentality, that they actually incapable of learning that lesson.

The interesting part is that further points out an internal schism in the Obama Regime, with the FLOTUS and Valerie Jarrett holding a separate court within the White House and often working against others in the inner circle in order to maintain or further their power.

â€œOprah was hoping there would be a genuine change in the atmospherics,â€ one of her friends told me. â€œBut there hasnâ€™t been. Clearly, she is being rebuffed at the level of Michelle and Valerie. And, just as obviously, President Obama hasnâ€™t interfered on Oprahâ€™s behalf.â€

Of course, it doesn’t have to be even that complicated. There are simpler and baser reasons that might explain the schism between the White House and Oprah Winfrey who, in other times, would be the logical celebrity spokeswoman for the regime. 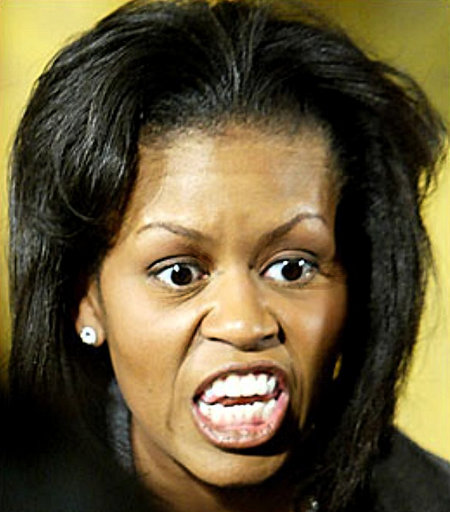 Fat-Assed, Nigga Bitch Needs To Stay Away From My Man!

Of course the reasons don’t really matter all that much in the long run. What matters is that the Obama Regime has burned the bridge between themselves and Oprah Winfrey, who a great number of people – people in key demographics for any perceived success by Obama – treat as a fount of wisom and who treat her words as Gospel.

That, of course, can only be a good thing for the American people.

This entry was posted on Tuesday, October 22nd, 2013 at 1:37 pm and is filed under Politics, Society. You can skip to the end and leave a response. Pinging is currently not allowed.