One thing that Liberals and Progressives love is illegal immigrants – as long as they’re Brown – and one thing that they hate is Americans being able to be armed.

Let’s concatenate what passes for the logic of their rhetoric and apply that which they use for illegal immigration for firearms. 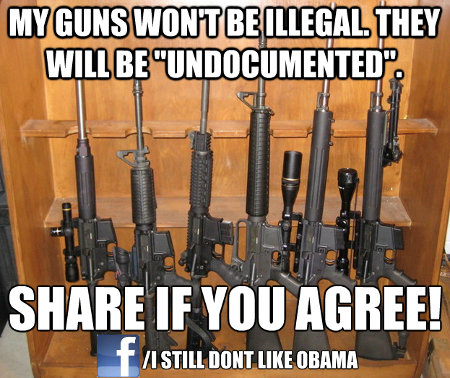 My Guns Won’t Be Illegal. They’ll Be Undocumented

Let’s be honest and face the grim facts. There’s never going to be a real reason for Americans being forced to register our weaponry with the government other than to create the framework for confiscation of those weapons and the criminalization of the Americans that own them.

I, for one, do not give my consent to anyone who chooses to attempt to govern me in such a fashion and, if they should try to rule over me instead, I will, without compunction or regret, exterminate them and all of their blood unto their last misborn crotch-dropping. I cannot see where any American could do differently.

This entry was posted on Wednesday, February 6th, 2013 at 12:03 pm and is filed under Politics. You can skip to the end and leave a response. Pinging is currently not allowed.