It’s been three years since Obama was installed as the POTUS. For three full years now America has writhed under the class warfare and utter uselessness of the Obama Regime. Our economy remains in the tank; jobs have continued to be, to put it kindly, thin on the ground except for the ever-growing public sector; and what there is of our foreign policy is a joke wrapped in a riddle, wrapped up in an enigma.

Throughout it all Obama’s continued response is to blame everyone and anyone except himself, with special emphasis on any who are productive, successful…and White. 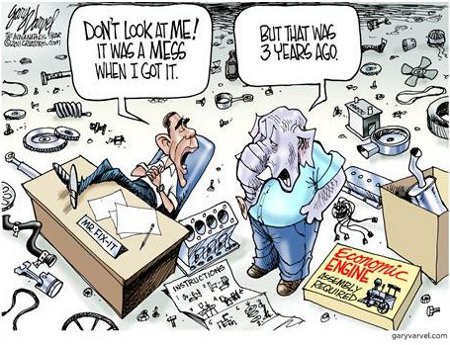 At what point will Obama own up to his failure? At what point will he, if ever, reject the sad myth of his being too Black to fail and accept responsibility for what he’s done and so often over the last three years failed to do?

My guess would be sometime after the boy is dead and brought up for judgement, not before.

This entry was posted on Wednesday, January 4th, 2012 at 10:18 am and is filed under 2012 Election, Politics. You can skip to the end and leave a response. Pinging is currently not allowed.

2 Responses to “It’s Been Three Years”