It’s perfectly fair to say that Obama has not been a boon to America’s economy. Nothing he’s done and nothing that he’s championed has improved the nation’s economic situation as a whole.

In point of fact, much of what Obama has either done or shilled for via the bully pulpit has had a chilling effect upon America’s economy.

There has been one significant uptick though, one segment of the economy that has responded positively to the Obama regime. Nationwide, firearms and ammunition sales have soared since Obama was installed as POTUS and that recovery shows no signs of slowing. 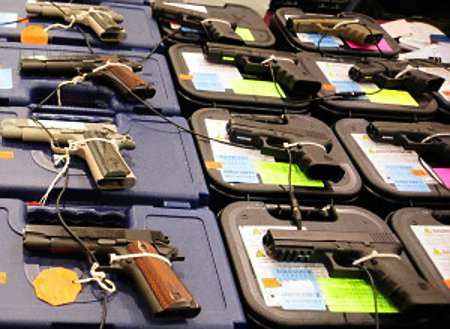 With a few days left in December, the FBI reports the number of background checks has already topped the previous one-month record — set only in November — of 1,534,414 inquiries by gun dealers to the National Instant Criminal Background Check System also known as NICS. Almost half a million checks were done in just the last six days before Christmas.

Two days before Christmas, NICS ran 102,222 background checks, which was the second-busiest day in history. The one-day record was set this year on Black Friday, the big shopping day following Thanksgiving, with 129,166 searches. By comparison, the previous one-day high was set November 28, 2008, when gun dealers made slightly less than 98,000 requests for background searches.

In a larger context, the record for firearm purchases in a single year was set 2010, when the FBI reported that approximately 14.4 million background checks were requested. In 2011 that figure topped 16 million, an estimated 10% jump sales.

So it seems that Obama’s economic boom is vastly ironic and probably not one that he’s comfortable with.

This entry was posted on Tuesday, January 3rd, 2012 at 4:32 pm and is filed under Politics. You can skip to the end and leave a response. Pinging is currently not allowed.