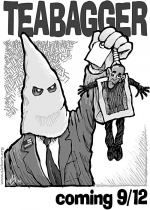 In truth, it’s an easy bit of rhetoric for the Liberal politicians, power brokers, and their MSM operatives such as Olbermann and Maddow, to use against the Tea Parties, since it resonates with both a large segment of the Black population and Leftist Whites as well.

It’s a simple fact that, when you’re a Liberal who is supporting America’s First Black President, who you’ve decided cannot be allowed to fail, a crowd of angry White Americans protesting his policies and agenda is both a danger and an opportunity.

After the Internet allowed the Tea Parties and alternate or citizens’ journalism outlets to largely refute the Liberals’ and their MSM operatives original tactic of only depicting and reporting upon the “lunatic fringe” of the protesters at the various rallies the Liberals fell back on a simple statement to continue to paint the Tea Parties as racists:

This is, admittedly, a somewhat alluring argument. The Tea Parties, after all, do seem to be a White phenomenon; one rarely, if ever, sees a Black among the crowds shown during coverage of the events. This means it’s certainly reasonable to question why there is such a seeming racial disparity between Blacks and Whites in the Tea Parties.

Is this racial disparity evidence of the racism of the Tea Party supporters or is this disparity caused by factors other than racism, prejudice, and animosity?

Statistical Data On The Tea Party

Opinion Research conducted interviews by telephone with 1,023 adult Americans, including 954 registered voters on February 12-15, 2010. They claim the margin of sampling error for results based on the total sample is +/-  3% overall.

Analysis of what percentage of Tea Party supporters should be Blacks based upon US racial demographics and political affiliation:

It’s a simple equation.  12% of population – 80% opposing ideology = 2.4% of Blacks should support the Tea Party on the basis of simple population and political viewpoint. CNN’s poll showed 2.0% of the self-identified Tea Party supporters were Black. Given the small sample size, that’s a within the realm of probable overall statistical error and only 1% above Opinion Research’s stated sampling error rate.

Furthermore, CNN’s poll had a total of 11% Black respondents, not 12%. That changes the baseline demographic projection to 2.2%, and an even closer match.

Assuming that there is an economic component to support of the Tea Party movement – an unproven but seductive supposition,  then Blacks would be roughly 50% less likely to be among them.

Assuming that there’s a direct correlation between living in suburban or rural communities and supporting the Tea Party movement – again an unproven but seductive supposition, only 42% of Blacks would be in a similar situation as the bulk of those supporters.

Simply put, the available data-set isn’t granular enough to allow one to properly correlate its various parts. The is no way to determine how to weight each individual factor, nor were notations on possible overlap of factors being present, e.g., what percentage of the rural Blacks make less than $50K per year or voted for Democratic candidates respectively.

Of course the above data and limited analysis was only that which has been quantified by the CNN / Opinion Research poll on the Tea Party supporters. It did not even attempt to factor in various unquantified – and likely unquantifiable – factors that might affect the racial demographics of the Tea Parties and their supporters.

Some of those unquantifiable factors include:

I’m fairly sure that every one of the above factors, plus a great number more that I didn’t list, negatively impact the number of Blacks that support the Tea Party movement. I can’t, however, make any judgment as to how much they affect it.

As far as I’m concerned the most compelling part of the data is the racial population demographics combined with the longitudinal support of Black for Democrats, a brand of politician largely unfavored by the Tea Parties and their supporters. Those numbers alone put Opinion Research’s finding of 2% of  Tea Party supporters being Black as actually being very close to the statistically predicted and expected number.

All the other quantifiable data that the Opinion Research poll provided was either non-informative  – e.g., education levels, which are comparable between Blacks and Tea Party supporters – or served to further point out the dissimilarity between the lifestyles, circumstances, and probable viewpoints of the majority of Blacks and the supporters of the Tea Party movement.

There is just no measurable basis for the Liberal politicians, power brokers, and their MSM operatives argument that the lack of Blacks in the Tea Party movement is proof or evidence that the Tea Parties are racist or have a racist agenda.

Are there racists who are Tea Partiers? In the words of Sarah Palin, You Betcha! ðŸ˜‰ You can find racist in any group of people, Black, Brown, White, Yellow, or Red, so of course you can find them in the Tea Parties as the MSM has taken great pains to do.

Is there any indication that they are anything more than a fringe element of the movement? No so far, but better and fuller judgment of the matter would have to wait for more data and analysis.

Is it about race? Is the lack of Black members and supporters an indication or proof that the Tea Parties are racists? The statistics indicate otherwise – and voluntary membership demographics are both a poor and frankly dangerous measure of racism for anyone to espouse using.

Shall we apply the same standard to: the NAACP, the Congressional Black Caucus, La Raza, or the “Historically Black Colleges” as the Liberals apply to the Tea Parties? Those other groups, after all, are even quite open about their having few, if any, White members or supporters and are, by their very natures, based upon purely racial and racially biased agendas and goals.

This entry was posted on Friday, March 5th, 2010 at 4:51 pm and is filed under Politics. You can leave a response, or trackback from your own site.

One Response to “It’s About Race”