Liberals, Progressives, and the Angry Negroes which the former two groups have a destructively codependent relationship with just love to rant and rail about “White Privilege,” condemning whites for possessing the features of modern life that should be and are available to all with the wit, skill, and will to accrue them.

And no Black in the history of America has made more use of- and gained more benefit from Black Privilege than Barack Obama. 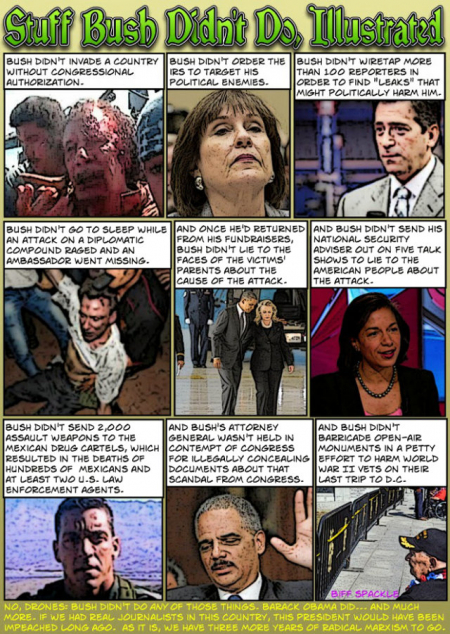 While the comic above specifically references President Bush Jr., Obama’s favorite scapegoat, the same sentiment also holds true for every other previous POTUS. But the all the previous presidents were White men and, therefor, held accountable for the actions, especially those that bothered the Leftists in America. Yet Obama is held blameless for his transgressions, real and perceived.

Nor can Obama’s lack of accountability to chalked off to his being both a Democrat and an avowed Liberal because the Left has never been shy about pillorying those of their own who have betrayed the tenets of Liberalism. And nobody can honestly say that Obama hasn’t betrayed the image the Liberals painted of him on the tabula rasa he presented them.

No, there can be no doubt whatsoever that the only reason that Obama survives as POTUS is the fact that he’s Black and Black Privilege enables him to do whatsoever he pleases without any fear of the Left or the Blacks turning against him or even not attacking any Americans who dissent against the boy’s actions and agenda.

This entry was posted on Monday, February 17th, 2014 at 10:02 am and is filed under Politics. You can skip to the end and leave a response. Pinging is currently not allowed.