There is no doubt in any sane person’s mind that Obama rose to power on a three part platform: that he wasn’t President Bush; the “Magic Negro” promise; and his avowed belief in far Left, Socialist policies. These three points are what allowed him to garner enough funding to buy his way into the Presidency.

The first two are important only in future historical context and as an object lesson in real racism; the reactionary nature of the electorate, and ethnoguiltism and racism are well established phenomena. It is only the third leg of Obama’s platform that really matters right now – his left-wing, socialist demagoguery based upon the postulate that America needs to be fundamentally changed. 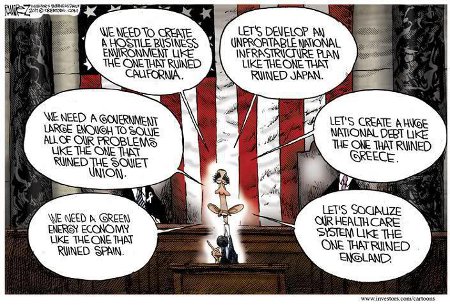 We Need To Fundamentally Change America

The sole bit of good news is that Liberalism and Progressivism, seasoned with racial angst, are only Obama’s professed and avowed ideologies. The boy is far to narcissistic, self-centered, and small to let any of his supposed beliefs get in the way of his legacy. This means that he’s controllable through his own weakness and that Americans, if they maintain or expand their control of Congress, can blunt most of his actions and policies that would harm America.

Hehe…Keep control of the House and get a few more seats in the Senate and Americans can impeach, convict, oust, and imprison or even hang Obama over Libya.

There’d be a certain joy – Schadenfreude certainly – in forcing the Liberals and Progressives to defend the President’s “right” to engage in illegal wars.

No, Obama is eminently defeatable even if he manages to shuck, jive, lie, and demagogue his way into a second term; he’s just a selfish, spoiled, little boy playing at being a man and, like all such brats, it just takes a firm hand to keep him in line – the last three years have proven that.

If Americans can keep their eyes on their local and state legislatures and upon the Congressional elections, we can look at Obama and, when he acts outs, metaphorically say, “Go to your room, boy!”

America needs, not to be fundamentally changed, but to fundamentally changed back into the great, shining beacon of freedom, liberty, responsibility, and pride that is meant to be – and, if Americans keep a firm hand on the strap, we can do that irrespective of whether or not Obama is continued to be allowed to be President.

This entry was posted on Monday, February 27th, 2012 at 7:57 am and is filed under 2012 Election, Politics. You can leave a response, or trackback from your own site.