There are normally many metrics by which to judge people and their suitability for any given job or role. Sadly, when it comes to political candidates for high office, one is forced to be overly dependent upon their words. What they claim to want is of primary, though nowhere’s near sole, importance in choosing between candidates. 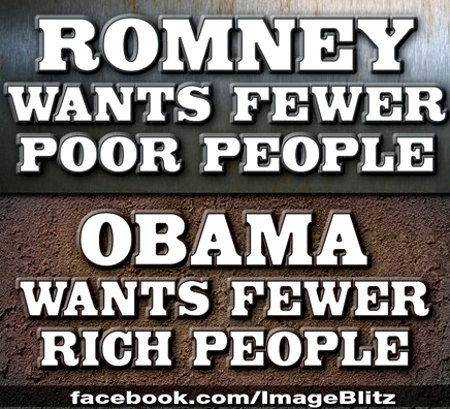 What Romney And Obama Each Say They Want

Judging by the words of the respective 2012 presidential candidates, Romney wants fewer poor people and Obama wants fewer wealthy people. You and I get to choose in November whose desires are in line the American ideal and whose are antithetical to it.

Yes, I know; As a White, my judging Obama by any criteria except the “importance” of his racial identification is racist as far as the Left and their political sharecroppers are concerned.