Given the boy’s campaign rhetoric, the 2012 Obama Platform is going to be very simple, very simple indeed… 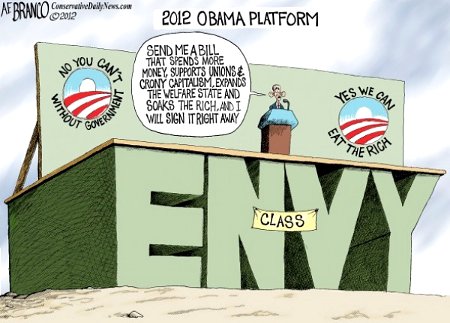 Yes We Can Eat The Rich

This, of course, makes perfect sense. The Campaigner-in-Chief is skilled enough at running for political office – if not in holding that office – to know that he has to stay within the preconceptions and comfort zone of his constituency.

So, of course Obama’s 2012 campaign for reelection is going to be centered upon class envy, racial angst, and an outraged sense of “denied entitlement.” That’s what his supporters are most experienced in and comfortable with.

Obama, himself, will mostly only speak of these things in a “nuanced” and deniable manner. His and his handlers’ proxies, however, will do far more than just dog-whistle for classism and race-baiting. That’s what they’re there for, after all.

Obama and his handlers have an uphill battle ahead of them though. Convincing anyone to give Obama another chance is going to be difficult. Americans have never tolerated his titular agenda and the Liberals and their minority tenants have been chagrined to learn that, while possibly as much of a Leftist as he claimed to be, Obama’s primary goal is and has always been his personal perceived success and all other ideologies must be thrown under the bus as needed to ensure that success.

This entry was posted on Tuesday, February 21st, 2012 at 2:50 pm and is filed under 2012 Election. You can skip to the end and leave a response. Pinging is currently not allowed.