Once again the jihadi vermin are polluting the air with their jabbering rants. This time it’s an alliance of Muslim terrorist organizations are trying to get the UN, already horribly infected by Muslims, to enact a global law against blasphemy of prophets and awarding the death penalty to violators.

Mankind should, given the degenerate nature of the UN, take such Islamist threats seriously.

Demanding a permanent ban on Facebook, over two dozen Pakistani religious groups working under the umbrella of the JuD have decided to contact the UN for enacting a global law “against blasphemy of prophets and awarding death penalty to violators.”

The decision to contact the UN and envoys from Muslims and non-Muslim states was made at a meeting of clerics belonging to the JuD, Jamaat-e-Islami, Jamiat Ulema-e-Pakistan, Tanzeem-e-Islami, Markaz-e-Ahlesunnat, Muslim Conference, Jamat-e-Ahlehadis, Jamiat Ulema-e-Islam, Pakistan Ulema Council and International Katham-e-Nabuwat.

The meeting, held yesterday at the JuD’s headquarters Markaz Alqaadsia in Chawburji, was presided over by JuD chief Hafiz Mohd Saeed.

“The ambassadors of Muslim and non-Muslim states will be told that blasphemy against prophets not only hurts the feelings of one religion but also sows a seed of hatred against the people of other religions,” the meeting observed.

The UN and envoys will be asked to support the enactment of an international law against blasphemy and the move to award the death penalty to violators, the meeting decided.

“Leaders of the ruling as well as of the opposition parties will also be called for their support,” the meeting decided.

Speaking on the occasion, Saeed asked the Muslim world to unite, introduce its own currency and develop a joint defense system.

The Muslim world should also spend the income from oil and other resources on the defense of Muslims, he said.

“It is shameful that our rulers and opposition are not playing their due role to register the protest of the nation with the US and other countries over the posting of blasphemous cartoons on (Facebook),” Saeed said and demanded a permanent ban on Facebook.

“All Muslim countries should put pressure on the UN to pass a law with death penalty for those committing blasphemy,” Saeed said.

He asked Muslims to boycott the products of those countries where blasphemous cartoons were published.

The meeting also decided to hold a public meeting in Islamabad against profane caricatures. Top leaders of almost all religious and religio-political parties will address this meeting.

There was also consensus that the groups should continue to hold public meetings and seminars and use other means to mobilize the people against “profanity.”

Take such attempts to destroy freedom in the foul name of fostering the abomination of the Muslims’ Caliphate seriously because these subhuman jihadi vermin certainly do so. They will use any means that are allowed to them to enslave the world to the worship of their false god and their disgusting pedophile prophet, Muhammad. 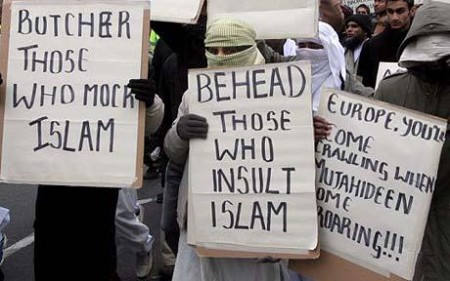 These misborn animals will continue to try to get the UN to pass laws protecting their cult and sensibilities of those creatures infected by it. If and when those attempts fail, as they fortunately have so far, these poorly crafted mockeries of human form will, as they always do, resort to violence and terrorism. 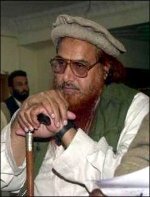 This sad but unalterable truth is made clear by the fact that these Islamist groups have banded together under the umbrella of Jama’at-ud-Da’wah (JuD), led by Hafiz Muhammad Saeed.

Unlike the Council on American Islamic Relations (CAIR) in the US, Jama’at-ud-Da’wah isn’t just a front group and money laundering operation for Muslim terrorist groups; Jama’at-ud-Da’wah is itself a terrorist organization. It is simply a renamed Lashkar-e-Taiba (LeT) which has committed repeated acts of terrorism across Asia for years.

So remember that when their sort issue their various mouthings about “mobilizing” Muslims they do not mean the same thing as people do when they use that word. Things like Saeed do not mobilize people for peaceful purposes; they mobilize armed nests of Muslims for the purposes spreading Islam and Shari’a by means of rape, murder, mutilation, and any other barbaric act that their cult finds pleasing.

This entry was posted on Monday, May 31st, 2010 at 1:07 pm and is filed under Politics, Religion. You can skip to the end and leave a response. Pinging is currently not allowed.