The Occupy Wall St. “movement” has spread far and wide, quite far and wide in hilarious “fact.” It’s even reached Afghanistan. 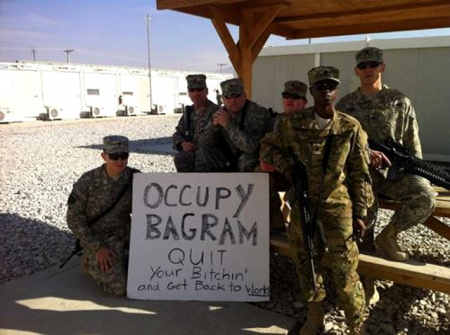 A Message From Occupy Bagram

Of course, the Leftist slackers that make up the OWS rabble aren’t the sort to listen to any message from America’s military, except for those messages sent by traitors such as Bradley Manning and Scott Olsen and the broken, lost souls who joined the anti-military groups, MoveOn.org and/or Code Pink.

It’s been made clear by their jabbering rants that OWS doesn’t consider “Occupiers” as a positive title when they apply it to the patriotic American men and women serving America and freedom in benighted hellholes like Iraq and Afghanistan.

Any message about quitting bitching and whining and going out and earning a living is also unlikely to sit well with the OWS rabble. Firstly, if they were capable of doing that they wouldn’t be crying for handouts. Secondly, doing so would be to “go outside the expertise of their people.”

H/T to the redoubtable Michelle Malkin and to her source, Blackfive.

This entry was posted on Sunday, November 20th, 2011 at 10:27 am and is filed under Humor, Politics. You can skip to the end and leave a response. Pinging is currently not allowed.