Reports are that the Muslim Terrorist vermin of Al-Qaeda have decided up Ayam Al-Zawahiri as their new leader now that Osama Bin Laden has, with the aid of DEVGRU, completed the circle of life and is a buffet for other, more naturally born bottom feeders. 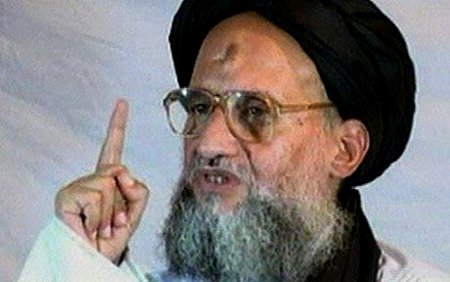 Ayam Al-Zawahiri – It Even Comes With Its Own Bullseye 😆

This is just a case of the US Military calling out, “Next!” to the long line of Muslim Terrorists and Jihadis polluting humankind’s world. Nothing of substance will change except that Al-Qaeda may be slightly less effective due to Al-Zawahiri’s more pronounced mental disease, i.e, Islam.

From AFP via Yahoo News:

WASHINGTON: The United States Thursday dismissed new al Qaeda supremo Ayman al-Zawahiri as a pale imitation of Osama bin Laden and warned the Egyptian to expect a similar fate to his slain predecessor.

US officials painted the 59-year-old long-time number two as an “armchair general” with no combat experience, saying he not only lacked charisma and leadership skills but was also a divisive figure that could fracture al Qaeda.

As we did both seek to capture and kill — and succeed in killing — bin Laden, we certainly will do the same thing with Zawahiri,” said Mullen, who is chairman of the Joint Chiefs of Staff.

US Defense Secretary Robert Gates, giving his valedictory press briefing at the Pentagon, could barely disguise his scorn, but warned that the announcement should serve as a reminder of the continuing Al-Qaeda threat.

Within reason, scorn for this creature, Ayam Al-Zawahiri is well-deserved. It sports a zebibah on it’s forehead. That means it’s such a zealot that it’s been banging and grinding it head into it prayer rug hard enough and long enough to leave that raise, discolored lump between its eyes.

On the bright side, such induced disfigurations make identification of the more dangerous examples of the vermin easier and provide a very convenient point of aim. 😉

This entry was posted on Saturday, June 18th, 2011 at 8:10 am and is filed under Politics, Religion. You can skip to the end and leave a response. Pinging is currently not allowed.