I’ll give the Warmists full marks for tenacity. Even in the wake of total failures of every one of the models to match reality and society as a general whole dismissing their alarmism and agenda, they still spend a fair amount of effort and money on preaching Global Warming. 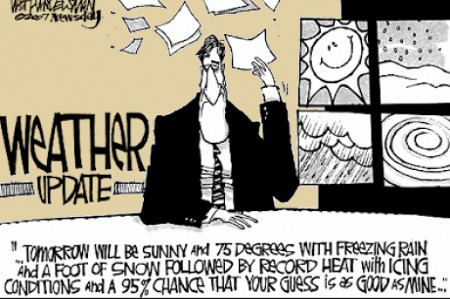 Your Guess Is As Good As Mine

The simple truth, however, is that their beliefs have more akin to religion than to science. When it comes to climate anyone’s guess as to what is going to happen and why it’s going to do so is as good as anyone else’s. The system is too large, complex, and has too many input variables for mankind to model or predict.

That won’t seemingly stop the Warmists though. They’ve taken their scripture to heart and will remain as staunchly faithful to it as the most devout of the Young Earth creationism. 😉

This entry was posted on Thursday, April 17th, 2014 at 11:40 am and is filed under Society, The Environment. You can leave a response, or trackback from your own site.