Who Pays My Debts?

Obama doesn’t believe – or claims during his ongoing campaign that he doesn’t – that business create their businesses. Instead, the boy says that someone else did that.

That begs the question of who pays for a business’ failure. If someone else built that business, are they, or should they be, responsible for paying off its debts if and when it goes under? 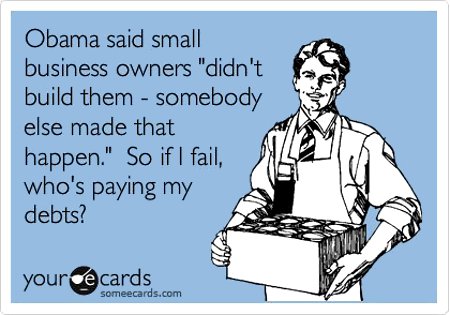 If I Fail, Who Pays My Debts?

In what passes for the Liberal mind, profits are to be socialized via confiscatory taxation but risks are to remain purely privatized. The collective mind demands accolades but spurns jeers, whether either come from individuals or the impersonal forces of the market.

This all changes when the business is a very large corporation.In those rarefied, “too big to fail” instances, it will always be the tax payers that get saddled with the failed business’ debts. And, of course, the government will step in to determine just which creditors – their donors and supporters – actually get paid and which get told to shut up or face the consequences.

This entry was posted on Monday, July 23rd, 2012 at 11:45 am and is filed under 2012 Election, Politics. You can skip to the end and leave a response. Pinging is currently not allowed.