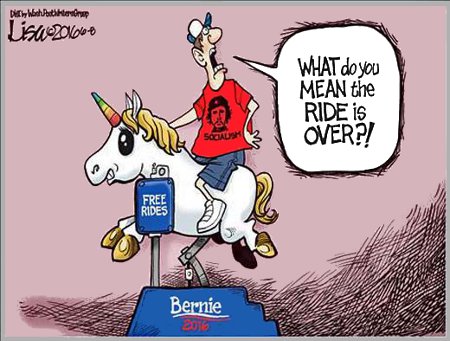 Get Off! The Ride’s Over, Bois

You almost have to feel sorry for the #BernOuts and #Sandernistas. That magical unicorn ride that their mommies and daddies payed for – yeah, paid for; there’s no such thing as a free ride – is over. Hillary Clinton has the Democrats’ nomination for POTUS and Bernie Sanders is over and done with, another failed Also Ran soon to be lost to dust of time.

I guess the poor, little snowflakes forgot two fact of life: Socialism only gains control of a nation through direct, violent force of arms; and their sorts are so very, very afraid of guns, whereas the American people aren’t.

This entry was posted on Tuesday, June 14th, 2016 at 6:26 pm and is filed under 2016 Election, Humor, Politics. You can leave a response, or trackback from your own site.