From even before Barack Obama was installed as the POTUS, he strove mightily to change the tone of America’s diplomacy with other world leaders and titular heads of state.  Since taking office he has been consistent in his efforts in this regard. 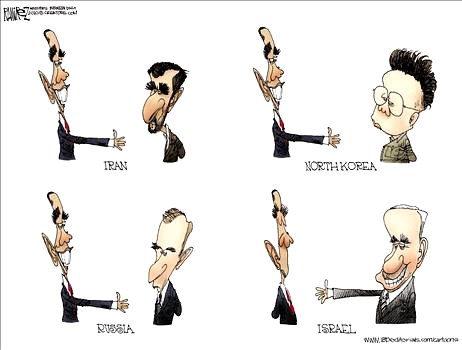 So far, I would say that President Obama has completely reversed over 30 years of American diplomacy and foreign policy. That being the case, it’s only fair to say that Obama’s diplomacy is one area in which he’s well on his way to achieving his oft-if-carefully-nuancely-stated goals… 😉

This entry was posted on Monday, April 5th, 2010 at 3:23 pm and is filed under Humor, Politics. You can skip to the end and leave a response. Pinging is currently not allowed.