Alright…There’s a bit of outrage circulating the world’s media and blogosphere at the moment over an image of President Obama “checking out” the admitting very, very fine bottom of a young woman during G8 Summit. 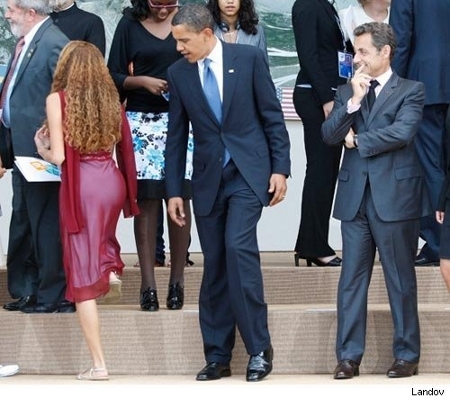 Would you look at that girl’s fine booty?

Many Conservative are – not unjustly given the evidence presented – quite upset of the 47 year-old, married father of two young daughters and President of the United States, Barack Obama ogling the butt of the 16 or 17 year-old Brazilian Junior G8 Delegate, Mayora Taveras.

The only problem is that President Obama wasn’t ogling Ms. Taveras’ butt. He was being a gentleman and helping another young woman navigate down the steps through the crowd.

Is being a gentleman so rare that nobody recognizes it anymore?

I loath President Obama and his agenda at least as much as the next real American, but let’s keep it real. There’s enough legitimate causes for outrage at Obama and his cabal of Liberals without jumping on everything little thing that pops up – especially when the media expects this sort knee-jerk behavior and will capitalize upon it as they just did with the photo shown above.

This entry was posted on Friday, July 10th, 2009 at 12:41 pm and is filed under Politics. You can leave a response, or trackback from your own site.