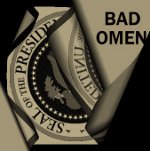 2 Responses to “Portents Of Change?”