OK, it’s truly a moot point, but this cartoon bring up a very relevant point and possibility – if in a completely Liberal-biased – and/or amoral – and sarcastic fashion. Leaving aside the Liberal’s propaganda of folding embryonic stem cell (ESC) research into the larger field of stem cell research, it’s a valid point that a moral person should question whether or not they’re willing to accept treatments derived from the destruction of human embryos. 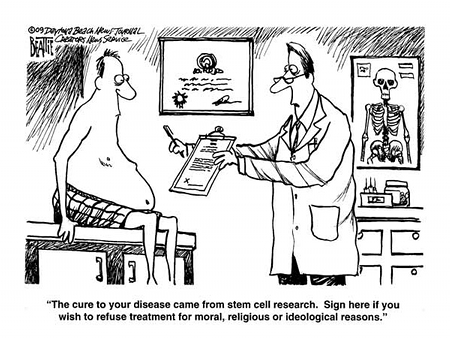 Perhaps it’s a fair and necessary compromise that all medical advances and procedures arising from the destruction of human embryos be labeled as such so that those people with moral objections to murder being used to further science can conscientiously object to such treatments.

One wonders if the Liberals would be in favor of such a compromise because of a hope that the people with ethical and moral objections to killing human embryos would die off sooner, or if these Liberals would decry such a labeling as being stigmatizing and prejudicial and fear that free market pressures would scuttle the treatments – as they have repeatedly done during the last eight years.

This entry was posted on Saturday, March 21st, 2009 at 9:25 am and is filed under Ethics & Morality, Politics, Society. You can skip to the end and leave a response. Pinging is currently not allowed.