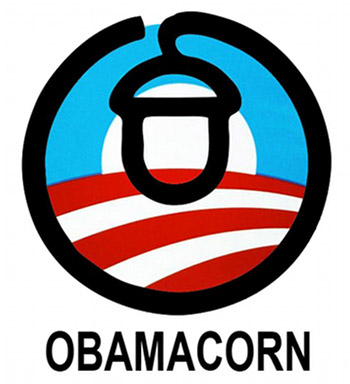 Just about everyone knows that President Obama was, back in the 1980’s, one of the myrmidons of the criminal organization, Association of Community Organizations for Reform Now (ACORN) and that they in turn later used any and all methods at their disposal to ensure his installation as a US Senator and then President.

It should not be a shock to anyone that President Obama would continue to support ACORN.

However, serving chocolate ACORN cookies at the December7, 2009, White House Christmas party might have been going a bit too far given the level of partisan controversy surrounding whether or not to protect America from ACORN by curtailing their use of American’s tax dollars to further their evil pursuits. 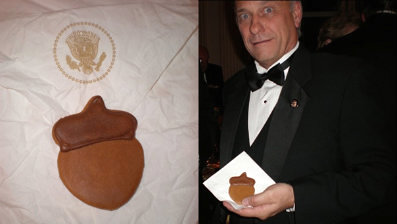 Rep. Steve King (R-IA), who has been leading America’s defense against ACORN, was certainly less than totally pleased by being served a chocolate ACORN cookie and a White House function. The Congressman didn’t expect to “see such stark symbolism” being shown at that sort of event.

Whose Crumby Idea Was It?

ðŸ˜† The pun is very much intended. But with a bit more seriousness, who is to blame for the Cookie Monster? Who chose to either show solidarity with ACORN or didn’t recognize that a cookie in the shape of an acorn would taken as a sign of such solidarity? Is Obama to blame?

If one is to blame President Barack Obama for the ACORN cookie, one would have to believe that the President of the United States got personally involved in choosing the pastries and confections served at the 2009 White House Christmas party. Since President Obama is more than a little busy accepting farcical foreign awards and maintaining his 2012 Presidential campaign, I find the idea that he personally chose or approved the party’s cookie selection doubtful in the extreme.

No; if one is looking to blame an Obama for the ACORN cookie, one must look not to the President but to the distaff, First Lady Michelle Obama.  Assuming the Michelle Obama is fulfilling the core duties of the First Lady, she would have been the Obama would have been likely to have chosen or approved the oddly controversial cookie.

The position of the First Lady is not an elected one, carries no official duties, and receives no salary. Nonetheless, first ladies have held a highly visible position in US government. The role of the first lady has evolved over the centuries. She is, first and foremost, the hostess of the White House. She organizes and attends official ceremonies and functions of state either along with, or in place of, the President.

— Wikipedia
Role of the First Lady

Would the First Lady, Michelle Obama deliberately choose or approve of such a “stark symbolism” of continued support for her husband’s old cronies? It probable that she would. ACORN’s racial demographic and racist agenda match up closer to Michelle Obama’s public statements than they do Barack Obama’s. However, would isn’t did and I find it rather doubtful, with the size of the current First Lady’s retinue, that Michelle Obama got that personally involved in planning the function.

Of course then we’d have to ask if there was a racist  message contained in the fact that it was a chocolate cookie. That sounds like a rough and largely pointless road to plow to me.

Most likely the ACORN cookie is actually just an acorn cookie and was chosen – I’m guessing among other shapes and types offered – by some White House baker who has as much political agenda and/or savvy as one might expect such a person to have, i.e.,  little to none.

Is it plausible that someone within President Obama’s administration used a chocolate cookie shaped like a stylized acorn as a “coded message” or “dog-whistle” for their continued support of the criminal organization, ACORN? Certainly it’s plausible; Obama himself, along with his Press Secretary, Robert Gibbs and his Senior Advisor for Public Engagement and Intergovernmental Affairs, Valerie Jarrett are all very well-schooled in such techniques and tactics.

Indeed, it’s possible that this was even more subtle than a case of “dog-whistle” politics. The chocolate ACORN cookie could have been an attempt at psychological engineering and manipulation by providing Senators and Congressmen a positive sensory experience involving the ACORN logo during the current controversy surrounding the group.

Both scenarios are respectively plausible and possible – but does anyone who is not oversensitized to the issue of ACORN really believe either of these ideas is what actually happened?

This entry was posted on Saturday, December 12th, 2009 at 10:25 am and is filed under Food & Drink, Politics. You can leave a response, or trackback from your own site.